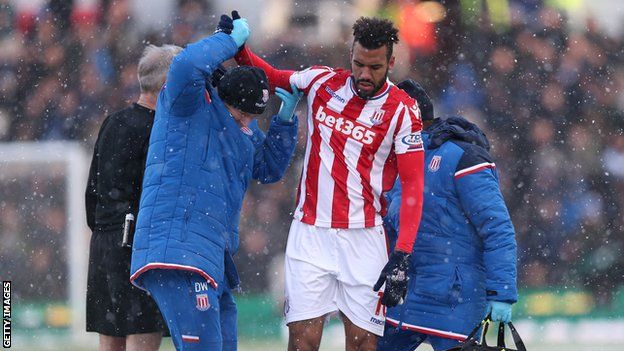 Image captionEric Maxim Choupo-Moting has not played a competitive game since a season-ending groin injury against Everton in March
Paris St-Germain have signed Stoke forward Eric Maxim Choupo-Moting on a free transfer and Bayern Munich left-back Juan Bernat for a reported £13.5m.
Cameroon international Choupo-Moting, 29, scored five goals in 32 games for Stoke but has not featured since their relegation to the Championship. He has signed a two-year deal with the French champions after his Stoke deal was cancelled by mutual consent.
Spain defender Bernat, 25, has agreed a three-year deal.
Meanwhile, Paris St-Germain have loaned Germany goalkeeper Kevin Trapp, 28, back to his previous club Eintracht Frankfurt for the season. They have also sent Argentina midfielder Giovani lo Celso, 22, on loan to Real Betis with the option for a permanent deal.